This past Saturday, I got the opportunity to go to a very cool event called Food Fight. The event was organized by a group called eSports Music X (EMX), Dim Mak, and Foodbeast.  The event was hosted at the eSports Arena in Santa Ana, California. The event ran from 6pm all the way until 12am and it was free!

This event is interesting, because it is a fusion event, combining not just one, but three things people love: food and drink, music, and gaming.

I figure, if both mediums offer entertainment, especially with music being in games, and even gaming music being popular, there must be a big market crossover for people to come to an event like this. And I was right.

First off, the eSports Arena is a pretty chill venue. The venue regularly offers local competitions for gaming, and even held a large 250-person Super Smash Bros. tournament, drawing public and drawing some of the biggest competitive names to the scene.

There was a pretty cool food truck outside offering tricked out burgers and tacos, but only one.

Stepping into the event, we were greeted by an employee. You walk in, and the first thing you notice is a dark and clubby vibe. Right as you walk in, you feel the energy, with electronic music pounding, and people all around.

The first thing in front of you when you walk in is a bar. For some, catching a drink is the first thing they’d want to do to start enjoying the rest of what is on offer. 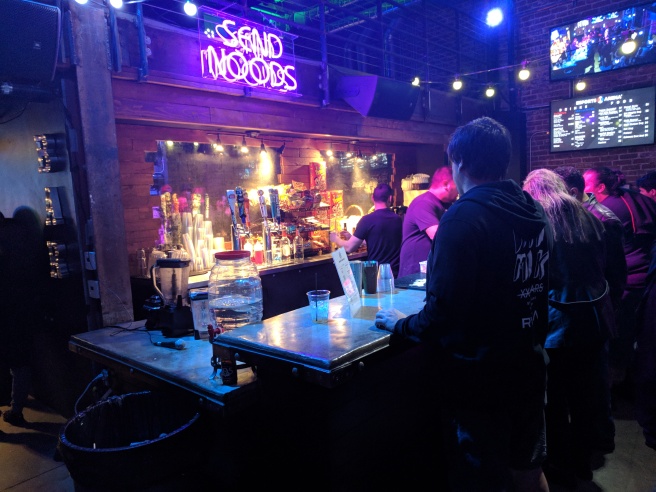 The event was also being livestreamed on Twitch, so you could see fancy recording equipment stationed everywhere. I was told that the venue also had a fancy production studio on-site, where the livestream broadcast production and editing was being handled by the team involved.

As you delve in further, you find videogame stations, designed for playing with two people at each station. There is an arcade machine setup on an Xbox One up front, where players can use real arcade sticks and buttons to play the hot new fighting game, Dragonball FighterZ. On the right, there was another gaming station for people to play Xbox games with normal controllers. This also suited two people and came pre-loaded with many games, such as Dragonball FighterZ and Halo: The Master Chief Collection. There was a also a Wii U station for people to play two-player matches in Smash Bros.

Though the event was not full, it was decently populated. It was interesting seeing the younger demographic come in with their friends, watching them enjoy the bar and music, but then also going to have fun with some rounds of DragonBall with their friends.

Going around a curve, you come to the main stage of the venue. There is a DJ playing electronic music, and groups of people crowding in front to party and enjoy the music. The DJ’s were provided by Dim Mak, which is Steve Aoki’s record label. Pretty good music back there.

There was also an upstairs area, which you could view the party from above from. This area also hosted several small standing tables where people could play cards or board games at.

There was also a lounge area with a large couch and a large screen TV, and Wii U, pre-loaded with a copy of Super Smash Bros. for Wii U, for a group to play.

Having arrived at around 9pm and attempting to go back up the stairs for more photos, I found the security had closed off the second floor. Must have not gotten too much traffic up there.

Overall, the event was fun, and it goes to show how just like with fusion food, fusion parties with gaming and music can be just as exciting. And just like music can be at events, gaming can be social as well. I believe combining two of entertainment’s most accessible and energetic mediums at an event like this is something truly unique. For me, as both an avid gamer and musician, it brings two of my biggest entertainment and creative passions into one event.

Some things that I would choose to improve about the event, are as follows:

First off, I believe the marketing for the event could be better. Even though I keep up with the latest news in gaming and music, I would not have known about this event if not for my friend telling me. More advertising and local marketing can definitely be done for future events.

Also, another thing to improve is to offer more gaming stations, more food options, and more activities to do around the area. I’d also recommend having a photo booth at the event for partygoers and their friends to come. Personally, I came around 9pm and was ready to leave at 11. I suppose staying for the DJ’s music is fine if you’re at a club, but for one-off events like this, most people aren’t enticed enough to stay the full six hours. After a while, people will get tired of playing games with pounding electronic music in the background, or they’ll likely be tired of listening to the DJ for six hours. However, for a short burst of a couple hours, this event is definitely something cool.

I’m looking forward to more events from EMX, and seeing their events continue to grow and get better. It’s definitely something unique, and for being in its first few rounds, it’s off to a great start. What they’re doing is cool, and I fully recommend everyone who’s interested in gaming or electronic music to check out one of their events.