Despite confirming that we will see a new Mario and Animal Crossing game on Switch, after Star Fox Zero not being widely well-received, the future of Star Fox has been up in the air. But reassuringly, Miyamoto has reaffirmed his interest in reviving Star Fox and Pikmin in the future.

This past week, Mario and Star Fox creator Shigeru Miyamoto sat down to do a long-form interview with tech mogul Katie Linendoll at Apple’s SoHo store in New York. The interview had many great highlights (including a question I asked!), which you can read about here, and listen to here.

But one other interesting tidbit from the interview was the fact that he talked about Star Fox. When asked if there was any character he wanted to develop or felt very passionate about that didn’t make it, Miyamoto replied:

Yeah, I always wanted Fox McCloud to be a bit more popular than he is. [Crowd:  “awww…”] But I think one more would be Pikmin. So I think these two, I’ll need to put some more energy into.

So contrary to recent reports that the future of Star Fox is “up in the air”, this all but confirms that Miyamoto wants to make more games for these franchises. We already know there are new Pikmin games coming, but Star Fox was uncertain, so it is reassuring to hear Miyamoto state that he wants to try again with Star Fox.

As it appears Nintendo is currently developing other franchises first for Switch, and given that Star Fox Zero just released this year, we likely won’t see a new Star Fox next year. But expecting a new Star Fox for Switch 2-3 years in would not be out of the realm of possibility.

What are your thoughts on this? Are you happy that Miyamoto wants to give Star Fox another chance and try harder with it? Let us know in the comments.

So the Nintendo Switch and Super Mario Run were both shown off in detail this week on The Tonight Show Starring Jimmy Fallon, and man was it great!

Nintendo of America President Reggie Fils-Aime, creator of Mario and Zelda, Shigeru Miyamoto, and Director of Product Marketing (and Miyamoto’s long-time translator), Bill Trinen, were all in attendance.

The segment began with an enthusiastic Reggie showing an ecstatic Jimmy, Super Mario run for iOS. Jimmy played the game for the first time, and did rather well! This was our first full glimpse of a level played on it, and it looks surprisingly great to me! The level design and music are pure New Super Mario Bros. quality, and I am excited to finally get my hands on it soon!

After that, Reggie announced that he had “One More Thing” left to show.

To everyone’s surprise, Reggie took away the “?” block, and voila – there was the Nintendo Switch!

I was nearly as excited as Jimmy was when he saw what it was, and it was amazing to see it live, aside from its staged reveal video. Indeed, the Switch is looking good, and it is even thinner than I thought! Fils-Aime showed Fallon how it looked and played in docked mode, and then proceeded to show him it in handheld mode! It switched quickly, made an interesting snapping sound, and it was ready to go!

Many sites have picked up some interesting news from this video, as the video provided a more in-depth view of the console not seen in the reveal trailer. One such is Nintendo Everything.

In regards to graphical detail, Breath of the Wild looked amazing! I cannot express how excited I am. It looks really great on the Switch. The graphics look much more clear than on the Wii U, and look very next-gen! I was very impressed with the clarity, as well as how the explosions look! I reckon it is running at true 1080p while docked. It even looked great while undocked, and appeared to run more smoothly than the Wii U version. I’ve decided I’m getting the Switch version now!

Additionally, it will look even better when we see direct footage, because the screen in the video is slightly washed out (you can see how the red of the Switch logo is much less than the Switch logo we’re used to seeing). It may also be that the color correction is focused on the persons (Jimmy and Reggie), rather than the screen. Either way, it already looks phenomenal, and will look even better when we see it on our own screens!

Breath of the Wild – Wii U & Switch (early comparison)

Overall, this has been a good week for Nintendo. After this announcement, and after fans got the ability to play Super Mario Run at Apple Stores, Nintendo’s shares have jumped 3.7%, rising to the levels of Pokemon GO, and that to me says that this is going to be a very successful game, and that the Switch looks very promising, as well!

Check out the full video of Nintendo’s reveal below!

I am now deeply looking forward to what Nintendo has in store for us at their January 12 event!

What a week it’s been for gaming! This past week, I attended both The Game Awards 2016 and PlayStation Experience 2016. I had great fun at both!

It was really fun to experience a celebration of gaming this past year, and where it is going next. I was very excited to see a new trailer for Death Stranding, as well as see Hideo Kojima receive his long-awaited and well-deserved award for industry icon. Unfortunately, I got inside the show right after he had received it, but it was a joy to watch it on the stream. The Legend of Zelda: Breath of the Wild’s trailer and gameplay video were even more amazing to me. I am in love with the music in the trailer, and in the new game. It was also really cool to see the main theme from the E3 trailer appear in the game during the Let’s Play video. I was also excited to see some towns and NPCs, and possibly Zelda, and Impa. This game keeps looking better and better, and I can not wait to finally play it next year!

I thought it was great to attend The Game Awards in person for the first time. The sound was not as good as I expected, as it was a bit quiet. Although I could clearly hear everything, so that’s all that counts. But it was just very cool to get a glimpse of the production and what’s going on off the screen, while everything is happening. As a media producer, it was very cool to see everything come together in person, as well as see all of the presenters in person, as well. My friend also got to sit near Bill Trinen and Kit Ellis from Nintendo, so not too shabby!

The awards ended spectacularly, and I would like to go again next year, hopefully at a closer seat! The Game Awards never disappoint.

After the awards show, I was treated to PlayStation goodness on Saturday and Sunday. On Saturday, I stayed home and watched the conference and Death Stranding panel, and they were both glorious. Though I don’t currently own a PlayStation system, it was very cool to see all the new games. The presentation made me even more excited to own a PS4, with games like Resident EVII: Biohazard, Ni No Kuni, and the return of Crash Bandicoot! I owned a PlayStation 1 as a kid, so I played the originals, and I’m excited to return to these worlds! Additionally, games like Ace Combat 7, The Last of Us Part II, and Uncharted 4 looked amazing, as well. The trailer for Uncharted made want to actually get that right away! So did Horizon: Zero Dawn, which looked great in 4K and HDR. Overall, the conference was great, and I loved seeing so much content in one presentation!

On Sunday, I went for about 4 hours, and had a blast! I got a ton of pictures and videos, and am making a montage. I got to walk around and get great pictures and footage of everything, as well as play a few great games! I played Gravity Rush 2, which has great anime graphics, and I really liked the battle mechanics. It felt better than it initially looked once I played it! I also got to play Crash Bandicoot N Sane Trilogy, and man was that great! The remastered graphics look even better than they do from a video, and the teams did a really good job reviving Crash for modern consoles. The game looks, feels, and plays great! It brings back nostalgia for sure, with remastered HD goodness.

Here’s a video we took of the first stage from the demo:

We also got to write our names on the awesome PlayStation writing wall: 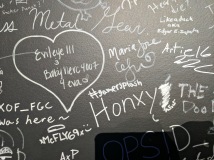 Indeed, it was a fun day, and I am now really looking to own a PlayStation even more now!

Here’s a gallery with all my cool pics (and GIFs) from PSX!